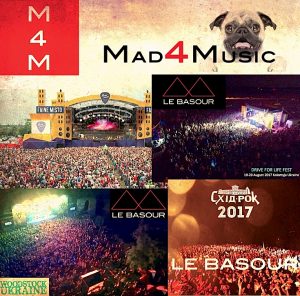 It is called Ukrainian Tour 2017 the tour of over 20 dates organized by Mad4Music and Andreea Stoica.
The Faine Misto Festival of July 21 will mark the beginning of this promising tour for Le Basour that will perform throughout the month of August on the most important stages in the nation including Woodstock Festival, Drive For Life Fest, Snov Summer Fest, Skhid-Rok Festival.

Le Basour knows Ukraine well thanks to the great success achieved in Kiev as a direct support to the Canadian Three Days Grace and the participation at Atlas Weekend Festival.

Allen (vocals, guitar), Skylle (bass) and KnK (guitar) are happy to announce that for this tour they will be accompanied by Giorgio Murer (alias The Painter) on the drums.

In addition to their foreign success, the band has a major presence on social media with over 24.000 follower on their official Facebook and over 500.000 views of their official channel on YouTube.

The title track Pray to Stay was broadcast exclusively on the official site of the national newspaper www.repubblica.it, and also played in over 100 radio such as Virgin Radio and Rai Radio2 with Caterpillar.