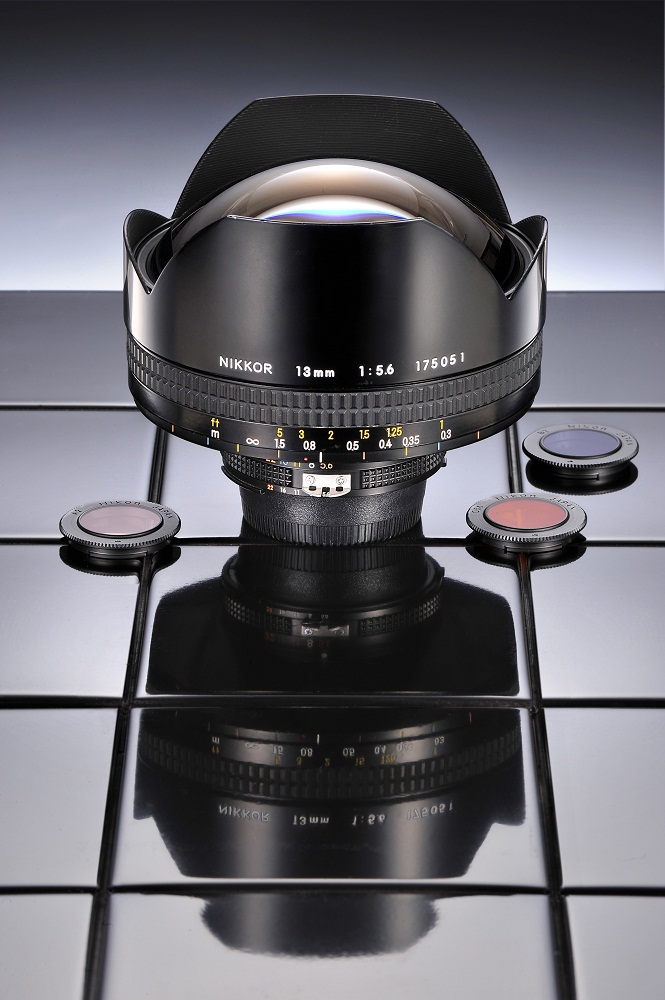 The 13mm f/5.6 Nikkor ultra-wide-angle lens was introduced in March 1976 in a pre-AI type lens mount. This extraordinary lens was only ever available to special order. The 13mm f/5.6 covers an angle of 118Âº. It weighs in at 1200 grams and represents the widest rectilinear lens available for the 35mm format. It is 4 inches long (10.2cm), with an aperture range from f/5.6 to f/22.

It has 16 elements in 12 groups; the front element has a diameter of almost 11cm and is surrounded by a fixed ‘petal’ style lens hood. It has a floating rear element design, CRC close-range correction, a rectilinear element design for straight line rendition and can focus down to one foot. In 1977 the lens was updated to the AI standard, and in March 1982 the third version was introduced with the AIS type mount with four x 39mm (rear bayonet mount) filters: Skylight, Orange, Amber and Blue in a CL-14 case.

It was designed by Mr. Ikuo Mori of the 1st Optical Section, Optical Designing Department at Nikon Optical Japan. Apparently only about 350 of these lenses were ever made.

The location for the shoot was the prestigious Leander Club at Henley-on-Thames. The Leander Club is one of the world’s oldest rowing clubs, an institution in itself and a hugely influential piece of British, International and Olympic history. Nestled by the finish line of the Henley Royal Regatta, it also occupies a prime spot next to the only straight stretch of the Thames anywhere. The shoot took place at dawn on a cold November day in 2012.

As well as his illustrious career in the Royal Navy, Pete is a double Olympic Gold Medalist in the Coxless Four (Rowing) from Beijing 2008 and London 2012. He also has the worldâ€™s largest recorded lung capacity at 11.68 litres.

“In order to capture the brilliance of this remarkable lens, one of the greatest Nikon has ever made, we needed a combination of a first class photographer like Felix Kunze, a remarkable sportsman like Pete Reed, a superb location like the Leander Club, and a gifted Director of Photography like Mark Gibson,” said Gray Levett, Editor, Nikon Owner magazine.

The shoot is the cover story of Issue 41 of Nikon Owner magazine and a behind the scenes video of the shoot can be seen here: http://www.youtube.com/watch?v=Yr-_KTLF_D4 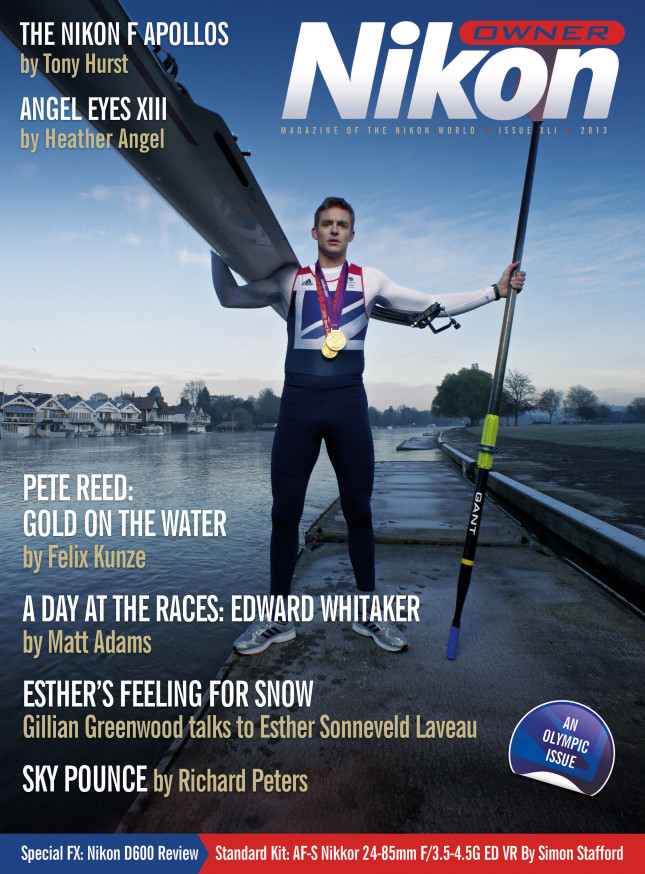 Nikon Owner is a worldwide publication with the purpose of uniting Nikon owners and bringing them unique offers that will increase their skill and interest in photography and Nikon equipment. Nikon Owner is dedicated to bringing the reader all the latest news and authoritative product reviews on Nikon equipment by renowned photographer and best-selling author Simon Stafford. Also featured are reader portfolios and inspirational pictures from the worldâ€™s leading Nikon professionals. It offers a unique perspective on the history, latest releases and events that shape the Nikon world. Then too, there are interviews with some of the greatest names in photography such as National Geographic legend Jim Brandenburg and Richard Young, the single most sought-after celebrity photographer in the world, as well as the much loved actor and keen photographer David Suchet CBE, best known as Agatha Christieâ€™s suave Belgian detective Hercule Poirot.

Nikon Owner is unmissable reading for anyone who takes an interest in Nikon camera equipment. Our special features are filled with unrivalled, compelling writing and superb photography.